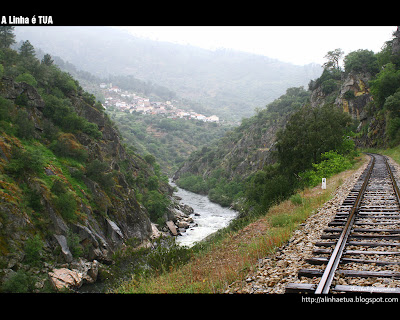 Dear Sir, Madam,
First of all, accept my apologies for not writing in Portuguese, my knowledge of your language is unfortunately much too weak...
I recently visited the Tua line: It is the only scenic narrow gauge line for which all the infrastructure is basically still in place to allow some kind of railway operation. The other line, the Vouga line, is not as beautiful as far as the scenery is concerned and is still operated by CP. Other lines have been dismantled (Corgo being the last one).
In many other European countries, private volunteer organisations operate scenic trains, so why not in Portugal?
The first step is to make a call for railway enthusiasts to set up an organisation and collect funds. Then you could buy a second hand diesel to operate some trains with selected cars from the ones that are standing in Tua station, following an agreement with the infrastructure owner (REFER).
The second step should be to contact an other European organisation that operates narrow gauge steam engines and have an agreement with them to operate one of their steam engines on the Tua line. HSB (Wernigerode, Germany) is the best to my eyes for that purpose. All steam engines in Portugal are beyond repair and none is in state good enough to be put on steam. So a foreign loco is required.
Interested partners should be:
There is to my knowledge no other scenic tourist (privately) operated train in Portugal. So there may be a "business case" for this project providing that you could drum up enough volunteers and support, both local and foreign.
Hope my suggestion will attract someone's attention.
Kind regards,

Jean-Louis Couvreur.
Belgium.
Lover of the Douro region and of scenic trains.

Dear Jean-Louis,
Probably, that would be a good way to keep all these railway lines, specially Tua, with an affluent number of costumers. However, the problem is much deeper. When Portugal has started to closed down the narrow gauge railways, there were quite a few people (most of them not Portuguese) who were willing to spend their own money to take over these wonderful railways. They were asking no funds from the government or so. It never happened just because REFER always refused any offers and rather wanted to abandon these railways forever, who knows, in the particular case of the Tua railway, to get some indemnity due to the dam for flooding the line... Once we were considered one of the countries in the world with better railway infrastructure. Now there is only a bunch of unreliable trains with bad schedules between the main cities.